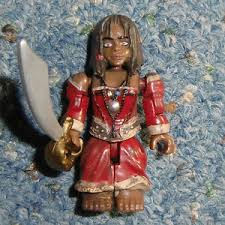 The Mystic Voodo fortune-teller,Tia Dalma was probably most famous for being in the Pirates of the Caribbean;Dead Man's Chest, and; At World's End.

But she had a secret past.....Thousands of years before, Tia Dalma was known as Calypso, a Nymph who was very powerful and ruled the seas. Many knew her as a goddess, but when people in the known World had abandoned old Pagen belifes with Christian, Jewish and Muslim ones, she left the familiar waters, and set off for an Island on the West Indies, where she realised that she could be worshipped again. People on this Island worshipped her, after she put some of her magic powers into a stone as a gift for their strong Faith..

She was safely on the Island, worshipped for another 800 years, until, strangers arrived. Francis Madillian had discovered a new land. And when he found the Magical Stone, he stole the magic and preserved the powers in a staff and left. This angered Calypso greatly. But she gave him a choise. He could keep the magic as long as he worshipped her. He refused, but kept the magic still. As long as he had this magic, he could not die. So, many years later, when the  almost invincible Madillian sailed the seas, Calypso caused a storm to surround his ship. A massive wave washed the magic Staff (of which was the magic object), meaning that the Staff- dependant Madillian would eventaully die.

She had massive power over the seas, until around about a hundred and fifty years had past, and the Brethren Court was summoned (a court of pyrate alliances), who managed to trap her into a human form, making it safer for pyrates to sail.

But that wasn't the end of her power. She later went by the name Tia Dalma, and by the 1720s, became a proffesional fortune-teller. One day, she left her home to look for an adventure, when she reached the Island of Pelegostos, and fell in love with the Tribal King, King Mabootu. She wanted him to worship her, like others did before, but there was a distraction. The Christian Missionary, Matthew Gallows was teaching him about the Bible. Because of this, Tia Dalma wanted to get rid of him. So, when Provost Parel was trying to find evidance that Gallows was on the side of the Pyrates, she was first to give him away, by over exaggerating the fact that he sympathized with the Marauders.

After Gallows was arrested, he was sent to the Prison Island of Fort Del Rodger. When the Pyrates were planning to save him, she said that they shouldn't. Mabootu was very suprised by her opinion, and Captain Cutlass demanded Tia Dalma to explain herself. Then she explained that she was the Nymph Calypso......ect......ect......

When she finished the story, they put her in the brig, but she escaped, never to be seen by the Marauders again. However, years later, Jack Sparrow and the others would also find out the dark secrets of Calypso in the Pirates of the Caribbean adventures.

Calypso first documented in Homer's Odyssey.  Main story made up by Disney and Baginman.

Write the first section of your page here.

Write the second section of your page here.

Retrieved from "https://pyrates.fandom.com/wiki/Tia_Dalma/Calypso?oldid=5883"
Community content is available under CC-BY-SA unless otherwise noted.