The Fight On Lost Fortune

Lost Fortune is a volcanic island to the west of the main island. This is the island where the Lord of the Pyrates lay his final treasure in a small fort. It is home to two terrifying creatures, Crabster and Razorscales. It was inhabited by these monsters and three castaways until the fight. In the end the Bucanners won the island but left it as they won the treasure too. 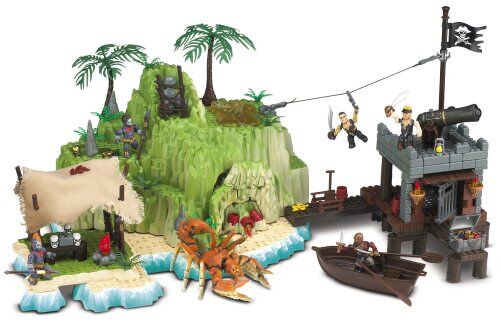 Attack of the Mutineers[]

The next side to arrive was the Bucanneers. The Stormstalker opens fire upon the Predator, rocking the ship in waves. The Predator returns fire and within minutes the whole island is roaring in gun fire. The loud noises do not go unheeded as something moves in the darkness. A final shot from Peter Portside blows open the mountain releasing the Crabster upon Louwala Clough, the final castaway.

Taking the moment of distraction, Murk Mariner charged Nicholas Nautilis, who had arrived with the Marauders. Nautilis made Mariner surrender. The other four mutineers started to sneak around Crabster as he ate. They were almost there when the skeletons broke through the foliage and caught the beast’s attention. It charged straight at the Mutineers. Merchant tried to shoot it but was knocked aside as Crabster cut Blackburn and Craven apart. Merchant and Lavoie tried to kill the beast but just angered it more. Lavoie ran, losing it on the slopes, while Merchant was eaten. Lavoie ran right into the marching skeletons. He tried to run away but Nautilasher took his legs out with his spear, while Scrapedepth cut off his head.

Victory For The Buccaneers[]

While all that was going on, the Buccaneers sent their own landing crew consisting of Gangrene, Billows, Longshore and Blackeye, and captured the treasure. They retreated to their fort with the treasure followed by the wounded Marauders, who came out bottom in the battle. This left the skeletons on the island, who sacked the fort when they found no treasure. They killed Crabster and ran back to the Phantom. They followed the Buccaneers.

All in all the Mutineers were wiped out aside from Mariner, while the other sides lost none, (except the castaways, who were completely destroyed.) The Privateers never showed up to the fight as they now had no boat to share after the lighthouse battle. But they were waiting for their new ship to be delivered to the Lighthouse by Theodore Twosails. The Buccaneers reached the Fort first but had little time to prepare before the rest of the crews showed up.