"And Smuggler's Fort! Blimey, I've found you at last! You hide the most coveted bounty! The Treasure of the Lord of the Pyrates! Harhahahahar!" - Captain Cutlass

Smuggler's Fort is a large Box Playset featured in the Pyrates franchise. It is a fortress located on Treasure Island, located on the southern edge of Skull Haven.

The history of the fortress is largely unknown, though it's presumed to have been used by smugglers as a means of defending themselves from attack. It's implied that the Skeleton Crew had used it during their time with Lord Pyrate's crew, and may have been the site in which they attacked to retrieve the Lord Pyrate's Treasure.

The fort is happened upon by the Sea Marauders in their search for the treasure. Captain Cutlass remarks the fort as the location of the treasure and sends his crew over to investigate. The crew are suddenly ambushed by the Skeleton and a battle ensues, leading to the Skeleton's presumed defeat. A skeleton is dropped through the trap door during the battle, while another uses the cannon to fire upon the Stormstalker.

It is occasionally suggested that Smuggler's Fort was the actual location of the treasure, but this is later disproved.

Smuggler's Fort was released as a large Playset to go with the Skull Playsets, alongside Pyrate's Cove. Like the Ship Playsets, these are assembled into a single structure and have many more accessories than other Pyrates playsets.

The fort sits between a pair of large rock formations, leaving a large chasm right below it in the center. The left side has palm tree neck to a rock and a submerged cavern. The right has a pair of ladders leading from the fort to the water, for access by the available rowboat. Beside the ladders is also a cannon. The fort itself has a trapdoor leading into the chasm, likely for lowering cargo onto waiting boats below. Behind the fort is also a lookout tower with a red flag, likely for spotting approaching ships. There is a pair of barrels and a treasure chest containing various gems, gold coins and the Golden Telescope. There is also a grey shark that lurks around the island.

The 2011 re-release is slightly smaller. It has a new design, but the overall concept is maintained. Figures have the same names, but the shark has been replaced with a crocodile. Braggart T. Doyle now replaces Lockpick Cabot and his shirt is now blue. The instructions says that the fort is owned by the Sea Marauders but the flag on the set shows that its a Privateers place.

Smuggler's Fort from the Front 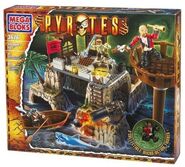 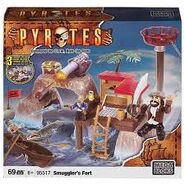