Pieces of Eight is a Pouch Playset released in the First Series of the Pyrates franchise. It is an island off the coast of Treasure Island and is owned by the Sea Marauders.

Pieces of Eight is a small playset that comes in a Pouch that contains a handful of accessories. The Pouch itself is brown with the Sea Marauders Symbol, representing the island's ownership. The island is a small patch of sand that has palm tree. It has a green snake and a treasure chest, containing six red gems and a compass disc.

Pieces of Eight as the Set. 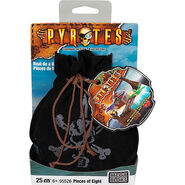