"There is no other ship on the surface of the water like Dread Eye's Phantom. It sails when darkness rains over the water, and the thickest of fogs covers everything." - The Narrator of Command the Crew, Rule the Seas

Dread Eye's Phantom, also known simply as the Phantom, is a Pyrate Ship crewed by the Skeleton Crew, owned and captained by Dread Eye. It is one of the three Ship Playsets available in the Pyrates franchise, the others being the Stormstalker and the Predator.

After the Lord Pyrate's Crew were transformed into Skeletons, they were in need of a vessel for use in seeking the Lord Pyrate's Treasure. Led by Dread Eye, they happened upon a whale skeleton on a deserted island and used it to build such a ship, naming it Dread Eye's Phantom. When shot at with cannon fire, the projectiles would simply pass through the Phantom without any trace of damage. The Phantom would lead many successful voyages and battles against other ships, destroying Captain Sabrehook's vessel and forcing a retreat from every other challenger.

The Skeleton Crew were conscious of the souls used to power the Phantom and often fed live sacrifices to the ship's maw to maintain it's "heartbeat", including Admiral Blue Beard and Sabrehook who later became Lost Souls. In the final battle and under the control of Captain Shoveltooth, both he and Dread Eye were cast into the ship's maw and overloaded the ship with souls, resulting in the Phantom's explosion.

"Carved from the ribcage of a whale, the Phantom ship coasts through the fog and strikes its rivals without warning. The Skeleton Crew commands this ghostly galleon, using their prisoners to feed the ship's ominous powers."- Caption in the instructions.

Dread Eye's Phantom is one of the three ShipPlaysets released in the Pyrates Franchise, paired alongside Captain Cutlass' Stormstalker and later accompanied by Admiral Scathe's Predator. It was the largest of the Ship Playsets and had the most accessories.

The Phantom is referred to as a Galleon, although more resembling a Brigantine, with a skeletal aesthetic. It has two masts and three sails, the highest sail bearing the Skeleton Crew symbol. The hull is supported upon a rib-cage that ends in an eldritch humanoid figurehead hanging from the bow, along with boned for railing. The wheel is made of bones and sits before a skeletal throne built within a jawbone.

Below deck, each side of the Phantom supports three cannons. Along with it is a battery-powered set of lights that glow blue when activated, replicating the ship's process of consuming a soul. At the back of the ship is a trapdoor connected to the maw, designed for disposing of the sacrifices' remains after absorption.

in 2011, a new Phantom was released to go with the rest of the new Pyrate sets. The sails are black, and the Skeleton Crew insignia is no more, constrasting from the white sails in the original set The throne has been removed and replaced with a short mast piece. Another notable change is the hull no longer illuminates when 'fed'. Now it includes a dinghy ferrying Sea Marauder Brigadoon Blackburn. Dread Eye's legs have been changed to green, but the rest of the crew seems to be the same, aside from the slightly different bone coloring. The box art depicts a black hull, but the actual set has the same gray color as the original. 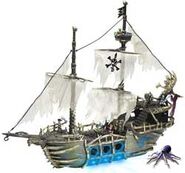 The Phantom from the Front 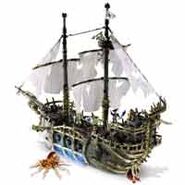 The Phantom from the Back 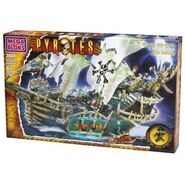 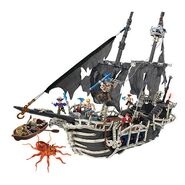 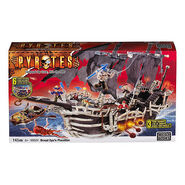