Maroon Galley is a small island off the coast of Skull Haven, owned by the Skeleton Crew. It is one of the three Skull Playsets available in the First Series of the Pyrates! franchise, the others being Mutiny Isle and Coffer Trap.

Maroon Galley is a small island located to the northeast of Treasure Island, off the coast of Skull Haven. When the Sea Marauders led by Captain Cutlass arrived in Skull Haven, he sent crew members over to search for the Treasure of the Lord Pyrate. They satisfied themselves that the islands were empty, leading Captain Cutlass to suspect a trap. Suddenly, Skeletons ambushed the pirates and held the upper hand, but cannon fire from the Stormstalker blew up the islands and the Skeletons on them.

Maroon Galley was one of the Skull Playsets featured in the Pyrates line of toys, along with Mutiny Isle and Coffer Trap. It is a Skull with a removable back that contains pieces for the set, the back of the Skull making the island's base. The Skull for Maroon Galley had a red crystal eye and an eye-patch.

The island's main feature is a shack that houses a cannon. The other end leads to a dock, along with a rowboat with a pair of oars. A red and blue gem sit together in the sand.

In 2011, MB re-released a few sets with differences. This one gets the award for the least changed. The original was boring, this one isn't any better or worse. Although number of figures has become less, they have increased pcs number. 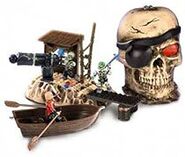 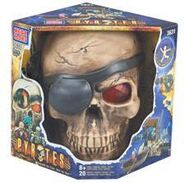 Maroon Galley in the Box 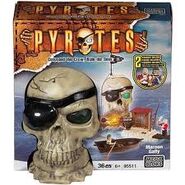 Re-Released Maroon Galley in the Box

Community content is available under CC-BY-SA unless otherwise noted.
Advertisement