Coffer Trap is a small island off the coast of Skull Haven, owned by the Sea Marauders. It is one of the three Skull Playsets available in the First Series of the Pyrates! franchise, the others being Mutiny Isle and Maroon Galley.

Coffer Trap is a small island located to the southwest of Treasure Island, off the coast of Skull Haven. When the Sea Marauders led by Captain Cutlass arrived at Skull Haven, he sent crew members over to search for the Treasure of the Lord Pyrate. They satisfied themselves that the islands were empty, leading Captain Cutlass to suspect a trap. Suddenly, Skeletons ambushed the pirates and held the upper hand, but cannon fire from the Stormstalker blew up the islands and the Skeletons on them.

Coffer Trap was one of the Skull Playsets featured in the Pyrates line of toys, along with Mutiny Isle and Maroon Galley. It is a Skull with a removable back that contains pieces for the set, the back of the Skull making the island's base. The Skull for Coffer Trap had a green crystal eye, a crimson bandana and an eye-patch.

The island features a dock that leads to a stone formation, wear sits a platform with a harpoon cannon. The harpoon is accessible by a ladder sitting next a torch. The island also comes with an orange octopus. A green gem and a pile of gold sit together on the dock.

In 2011, MB re-released a few sets with a few changes. This one was one of the worst. It looks almost the same, minus a few color changes. 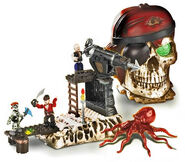 Coffer Trap with the Box 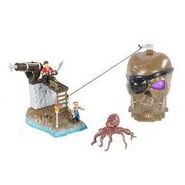