Fort Defiance was a Buccaneer fort built in to the side of a cliff. It had anough fire power to hold off an armada and that's exactly what it did. The remaining eight of them had recently captured the treasure of the lord of the pyrates and had to hold out from numerous attacks from the Privateers and the Marauders. Then the Phantom came and captured the treasure, wrecking the fort. 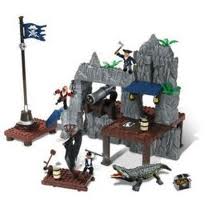 The Marauders, first to arrive, charged head on with their cannons hoping to get the treasure before the other sides came but were unable to dislodge the Buccaneers so they retreated when they saw the Privateer flag in the distance, not wanting to risk a landing crew to the power of the fort.

They got into two boats, one containing Parel, Kreegman and Buckbeard, the other containing Twosails, Suarez, Cabot and Doubloon. The Buccaneers knew that they would be defeated if the enemy landed due to their small number of men, so they directed all fire power away from the ship and towards the landing crew.

The first boat tipped over then sank in the wake of a cannonball, just missing them, forcing Parrel, Doubloon and Buckbeard to swim back to the ship. The second one landed, spilling the crew out in front of the charging Buccaneers. Twosails went straight at Blackeye, who was the leader of the charge. Portside and Scaburn, who were standing in for Gorvinsky (who died at the Lighthouse) and Scathe were also working on the Predator. Suarez went for Luke Longshore, and Gary Billows gave covering fire on Cabot and Doubloon as Gary Gangrene advanced at them.

Billows wounded Doubloon in the shoulder as Cabot took a shot at Gangrene, hitting him in the forehead and killing him instantly. Billows took cover behind a rock as Cabot shot at him relentlessly. Suarez and Longshore were in endless battle, one not being able to over power the other.

Blackeye knew the battle was not going towards them. He then remembered the oath he took to protect the treasure with his life. Swinging at his hand, Blackeye disarmed Twosails, who, then, looking for a weapon, picked up a hunting spear, and their fight moved onto the cliff face. In one swift move Blackeye kicked him off the cliff and into the water, shooting him on the way down. His body was eaten by a crocodile who had taken up residence under the platform.

Lockpick Cabot, who was now in command, ordered retreat, as their leader was dead and a man injured. Suarez dragged Doubloon to the boat and started to paddle away with Cabot, who gave covering fire.Edit

The total battle seemed to be going well for the Buccaneers until a thick fog fell over the fort, blinding the cannoneers. Out of the fog came the Phantom and the whole skeleton crew. Then the fog lifted and both the ship and the fort opened fire. The Buccaneers fired with so many cannons and with such precision it could have sunk the entire British fleet, but against the Phantom it did no damage. The Phantom sent out a quick volley from there cannons, disabling the fort's main firepower. They sent a landing crew consisting of Stonestare, Scrapedepth, Morose, Vertibrine, Agememnon and Dread Eye himself; A small but effective group of the best fighters.

The Buccaneers barricaded themselves inside the fort. As the Skeletons broke down the doors, the Buccaneers tried to make a run for it with the treasure and escape in the Predator but knew they could not get away in time. William Blackeye and Luke Longshore decided to stay and slow down the skeletons while Gary Billows escaped. With no time to lose they started to load the treasure on to the Predator. The last chest went into the hold and the ship weighed anchor as the Skeletons broke into the fort.

Longshore charged at Stonestare, knocking him out before heading towards Vertibrine. Vertibrine disarmed Longshore then cut his arm off at the elbow but before he could send the finishing blow. Longshore tackled him, wrestling for the skeletal axe. Longshore won and raised his good hand high, but got a spear in his back by Morose. He collapsed, still alive, struggling to stand while Morose shook his head, moving on to Blackeye.

Blackeye charged Agememnon, battled for a while then knocked him out. He then started to fight Morose. He eventually knocked him down and drew his pistol to shoot him but right before he could Morose grabbed his spear and stabbed it into the nearby Longshore's back, finally killing him. Blackeye wavered for a second but a second too long as Vertibrine kicked the gun from his hand and charged at him with no weapon. Blackeye stabbed him in the ribs and flipped him onto the ground, but saw Scrapedepth heading for the Predator. Dread Eye himself gave him a slice across the arm and Morose shot him in the side as he ran to stop Scrapedepth from reaching the ship. Scrapedepth turned and faced the wounded Buccaneer and started a lopsided fight. Amazingly Blackeye held out for six minutes against the most skilled swordsman in the whole Battle for the Treasure before he fell against the cliff face and passed out due to blood loss. That is where the Skeletons left him to bleed to death, leaving behind the most determined legacy of any pyrate in the war.

Dread Eye, who had started walking back to his Phantom, was suddenly jumped by Captain Cutlass, Nicholas Nautilis and Scotty Spitshine, who had snuck over in a rowboat to kidnap Dread Eye and ransom him for the treasure. They knocked him out before he could pull his sword out, then dragged him back to the Stormstalker.

Meanwhile Shoveltooth, the captain in Dread Eye's stead, saw he could rescue Dread Eye or capture the treasure as the Predator was escaping. He decided the treasure was more important and caught up to the slow-moving Predator as only five people were manning it. They opened fire on the defenseless Buccaneers, sinking the ship while the remaining men escaped in a rowboat.

Fort Defiance was completely destroyed with three Bucanneers killed and one Privateer killed. Dread Eye was angered when he found out they were leaving him. He agreed to help the Marauders. Later they picked up the Buccaneers floating at sea and they agreed to fight with them too. Finally they ran into the Privateers and Carbunkles agreed to join them in the destruction of the Phantom. Now with two ships the odds finally looked down for the skeletons. The final, most important battle of the whole war was aproaching.

Retrieved from "https://pyrates.fandom.com/wiki/Battle_For_Fort_Defiance?oldid=6019"
Community content is available under CC-BY-SA unless otherwise noted.